It's another beautiful Friday in March and we're finally ready for our Turquoise Morning Press back list book of the week.  Please help me welcome.... 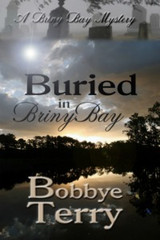 A Briny Bay Mystery, Book One
Roxie Turner finds herself up to her neck in trouble when her lifelong nemesis, Georgia Collins, is discovered buried in the town’s landfill. To make matters worse, with her characteristic Southern sass, Roxie has been saying she’d kill Georgia for more than twenty years. In fact, she listed the ways to do the woman in, constantly reminding prominent citizens of her intent. It was all a joke, or so she thought. But the joke turns on her as, suddenly, other dead bodies begin to pile up, all murdered with a technique from Roxie’s list.
Enlisting the assistance of handsome hunk, Greg Norris, Roxie’s sister, Trixie Frye, comes to her aid, bent on uncovering the killer and the truth. Can they find out both before Roxie goes to the big house?

~ I'd never met the sisters Trixie and Roxie, but now they are high on my list to follow when I want a clever mystery that is light and easy to read. Bobbye Terry has a winner with BURIED IN BRINEY BAY. It will keep you coming back for more.  Roxie has been running her mouth for 20 years about how much she'd like to murder the woman who had her husband's child and inherited his million dollar insurance policy. When she turns up in the local landfill Roxie is on her way to the big house unless she can prove herself innocent of the crime.  -- Author Nash Black

~ Buried in Briny Bay was my kind of book. Ms. Terry's offbeat sense of humor shines through her quirky characters. People were meeting their maker left and right, and I could not stop grinning. You have to love that!


About our Author:
A native Virginian, Bobbye Terry now resides in the cotton fields of West Texas with a Chocolate Lab that has a sock fetish. Bobbye is a multi-published author of romantic comedy, fantasy and suspense. Now, writing solo, except for a possible collaboration on special projects, she continues to write with extensive humor, even in suspense, where southern charm meets macabre reality.

This is a must read!  Don't lose out, get your copy HERE!