Book Blitz: Over The Ivy Wall by Rosa Sophia

Over The Ivy Wall
A Clearwater Novel 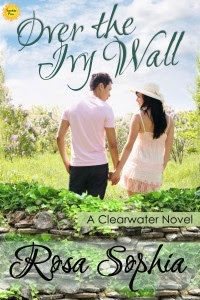 Clara Pendleton is a prisoner in her home. Always searching for new places to hide from her uncle, whose drunken attention terrifies and confuses her, she finds a tiny clearing in the back of the property near a disintegrating section of the ivy-covered wall that surrounds the estate.
Gaven Bridge has been sent to Clearwater to live with his Uncle Daniel. Never fitting in, he doesn’t believe he’ll ever meet anyone who understands him. But when he goes out for a walk in the woods, he happens upon a young lady sleeping soundly on a patch of moss.
A deep bond is fostered between them, helping Clara find the courage to change her life. When she finally decides to climb over the ivy wall and out into the world, there is no going back. Will Clara escape her horrible past, or will it destroy the love she and Gaven share?

Only $0.99 for a limited time, or read for free on Kindle Unlimited.
Buy/Read here

Excerpt:
Tears brimmed in her eyes as she wrapped her arm around him. He tucked her close to his body, holding her. “You’re making me feel good right now,” she whispered. “Touching me like this. Don’t you see?”
When he said nothing, she leaned up to look at him. “Gaven, you’re the reason I got away from there. You talked me into climbing over that wall. I wouldn’t have done it without you. After we met, I couldn’t get you out of my head. I wanted to be with you, and I still do. Thank you. Thank you so much for helping me out of there, for talking me into it. I’d still be there if it weren’t for you.”
“Clara, you’re strong, stronger than you realize.” With a gentle touch, he caressed her cheek, gazing into her eyes. “You could’ve done it without me. If—”
“No, don’t say if. I don’t want to think about that. I just want to be with you.”
His brow crinkled, his eyes betraying his amazement. “How can you want me?”
She smiled through her sorrow, tears rolling down her cheeks. “How can I not?” Leaning forward, she pressed her lips against his, the saltiness of her tears mixing with the sweet taste of his kiss. “I love you, Gaven.”

About the Author:
Rosa Sophia is the author of multiple romance novels including When I Dream of You, Meet Me in the Garden, and Over the Ivy Wall. She is also the author of The House Guest, a mystery, and A Siren for the Dead, her first science fiction novel. Later in 2015, Sunshine Press will be releasing her next installment in the Clearwater Romance series, entitled Orion Cross My Sky. When she finds the time, she enjoys writing about automotive topics and history. Click here to visit her personal blog, The Backwords Writer. Rosa currently resides in South Florida, where she lives in a cottage by the sea and spends a lot of time staring at palm trees and dreaming. She is also a crazy cat lady in training. 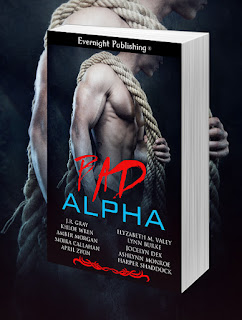 Bad Alpha: A Multi-Author Anthology by

Bad Alpha features a select collection of stories with shifters so ruthless they will stop at nothing to protect their pack. These aren't sugar-and-spice heroes. Our alphas are feared, inked, and don’t ask questions first. They take what they want, never give in to their enemies, and think love is for the weak—until they meet their mate. Are you ready to learn how to tame a savage heart? 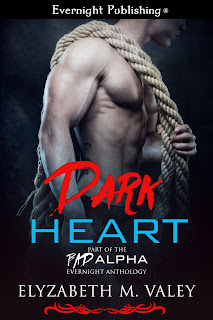 The world is changing. Vampires are coming out and they’re not remotely similar to the sensual Hollywood portrait made of them. Little by little, Shifters are being unmasked and integration is waning. Panic is spreading. The government is losing control. Private agencies, such as SOA struggle to find a solution, but as the darkness grows, can one even exist?
Ten years ago, Daryl Jones lost his pack to a group of demon vampires. Since then, he not only lost his will to battle for good, his life has become a spiral of drinking, fighting and fucking anything in sight. In his opinion, a pretty perfect existence. Until, he meets the new SOA representative sent to convince him to go back to the lab. With mile long legs, a tight little ass and a smile to kill for, when she offers him a bargain, how can he possibly refuse?
Silvia Adams, has one mission: convince Daryl Jones to work for SOA again. The agency needs him to get back into the lab and help develop a serum to neutralize the growing number of vampires. She knew it wouldn’t be easy task, but with her job on the line, she’ll do anything it takes, including, bargaining with the shifter and surrendering to her deepest desires. Only problem is, she might have bartered for more than she can handle.

Excerpt
Silvia had never seen a man's face transform so fast. He'd gone from hungry predator to angry wolf in a millisecond.  She kept her eyes locked on him as he swiveled in his chair and took a swig from his bottle. She fought the urge to snort. Really? He was giving her the cold shoulder? One minute he'd been staring at her mouth like he was going to kiss her and the next he was drinking tequila like it was water.
“Mr. Jones."
"Get out of here, sweetheart. Whatever your purpose is, you're not going to accomplish it, so I suggest you get out before I finish this bottle and become the sadistic monster I truly am."
Silvia swallowed. The bitterness in his tone was almost painful to hear, but she wasn't here to pity him or—she slightly shifted her weight, trying to eliminate the pressure in her panties— fuck him. She was here to get him to cooperate with the agency, and by all that was dear to her she'd do it.
"Whiskey on the rocks, please." She called to the waiter and settled in the barstool next to Daryl. Patiently, she waited for her drink. He ignored her or pretended to ignore her. From what she knew about him and his kind, Daryl Jones was always aware of what was going on around him.  When her drink arrived, she took a sip, crossed her legs and turned to stare at him. He didn't budge, and it was for the best. Her heart was beating at a ridiculous rate, and she knew it was much more than nerves. When she accepted this task she'd anticipated it'd be hard. After all, others had tried to talk Daryl into returning to the agency, but she hadn't foreseen just how hard it was going to be. Daryl Jones was incredibly handsome. He was the type of man women went weak in the knees for. Most men in their forties didn't look anything like he did. To begin with, they did not dress in jeans and cutoff black t-shirts. Nor did they have every inch of their arms tattooed. If it was rare to find a young man with long hair, it was even stranger to meet one at Daryl's age. His hair hung below his shoulders, with a few wisps of silver that only added to his mysterious and badass air. He had his wrinkles, of course, but they only added to his appeal. And then, there was the matter of his eyes. In this dim light she couldn't tell if they were a light blue or altogether silver.
Silvia took another sip of her drink. His build was impressive, too, and she couldn't help wondering how much of it was gym work and how much genetics. Not that it mattered, had she met him elsewhere with another mission in mind, she would have gladly fucked him. But today was not that day. Today she had to get him to help them.
She uncrossed her legs and shifted in her seat again. Not that her traitorous body was being any help. Her damn pussy was wet just from looking at him. Her nipples felt tight and sensitive against the material of her bra. And that jawline, barely dusted with a five o'clock beard, had her imagining what it would be like to press her lips to it.
"You gonna sit there staring at me all day?"

About Elyzabeth M. VaLey
Considered weird by normal standards – what is normal anyway?- Elyzabeth M. VaLey enjoys making up songs about mundane things, doodling stars and flowers on any blank sheet of paper, talking to her Lab whenever he feigns interest and coming up with love stories to make readers dream.
From contemporary to historical or fantasy, she enjoys writing stories about good and evil, love and passion and all that comes in between happy ever after.

Join us in Romancing the Military Man !!!

What Makes a hot military hero? 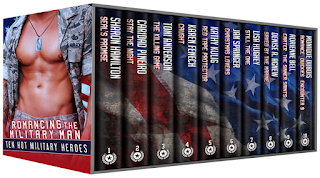 Sharon Hamilton
SEAL’s Promise
He makes a deathbed promise to care for his best friend’s wife and baby. She wants nothing to do with anything that reminds her of her fallen SEAL husband, until fate steps in to show her she is still connected, and needs the love of the flawed warrior who shares her grief.
Website | Newsletter | Facebook | Twitter


Caridad Pineiro
Stay The Night
Sexy Navy SEAL Rafe Castillo is home after months of separation. Will Rafe stay the night with his wife Elena so they can rekindle the love they once shared?
Website | Newsletter | Facebook | Twitter


Karen Fenech
Caught
When Elle Jameson is caught by a human trafficker, she doesn't dare believe the man's claims that all is not as it seems and that he will see her safely home, not even when she finds herself softening toward him, because trusting him, believing him, may cost Elle her life.
Website | Newsletter| Facebook | Twitter

Lisa Hughey
Still The One (Family Stone #4 Jack)
Jack Stone never got over Bliss Lee…but he can he convince her she’s still the one?
Website | Newsletter  | Facebook | Twitter


Denise A. Agnew
Saved By The Marine
Explosive danger creates a whirlwind of heat between a marine and the woman he’s just met when they’re trapped in a terrifying situation.
Website | Newsletter | Facebook |Twitter