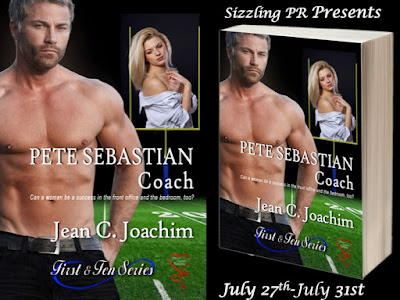 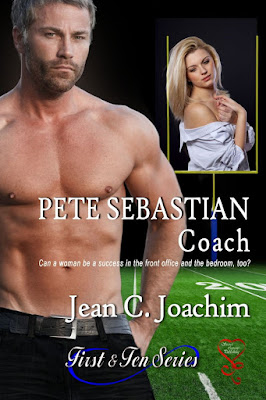 Love Stories that take your breath away.
Pete Sebastian, Coach Bass to his team, thought he had his life under control until smart, alluring Jo Parker sashayed into a front office job with the Connecticut Kings. He locks horns with the beautiful female when she implements new ideas to clean-up the team’s rep. Was she there just to push him around or was she the one woman he’s been seeking?

Struggling toward success in the man’s-man world of the NFL, Jo Parker has relied on her brains and determination to get ahead. But her new job at the Kings has one hurdle she hadn’t counted on – a sexy coach standing in her way. How can she keep her mind on her job when all she wants is to get closer, much closer, to the coach?

Can Coach Bass handle a woman in the boardroom and the bedroom? Can he keep his heart safe or will the revelation of a secret destroy his dreams, leaving him alone once more?

Excerpt:
“I’d never hurt you. Never. No matter what happened,” he said, leaning back against the wall.

“Even if I broke it off between us and started dating someone else? Someone on the team?”

He sucked in a breath. “That would be tough to swallow. I might be pissed off, plenty pissed off, but I’d never try to get you fired or anything.”

“Or sabotage me? Or a project I was working on?”

“Nope. Not my style. In fact, I’m usually the one to leave.”

She laughed again. “Really? That’s funny. Then, you have no experience and don’t know what you’d do.”

“Hell, I’ve been living with myself for forty-two years. I know what I wouldn’t do.”

She sauntered over to him and gazed up into his eyes. “It’s funny what passion turned backward can do.”

“Not remove all my standards.”

“I’ve had enough women to know each one is not necessarily the last.”

“God, you smell good,” he whispered into her hair.

“Oh? I thought I was just another woman who came along.”

“Thanks.” She closed her eyes and lost herself in his arms again. He stroked her back. Jo lifted her head and eased out of his embrace.

“Coffee’s done its job. I think I’d better go…while I can.”

He nodded. “I’ll get your coat and walk you to your car.” He held her wrap while she slipped her arms in the sleeves then closed his around her, bent, and kissed her neck. Jo shifted her head back to rest on his shoulder. The feather-soft feel of his lips made her tremble.
“Sorry,” he said, straightening up. “I must have been a vampire in another life. Can’t resist a pretty neck.”

When she turned, he grabbed her and kissed her with raw passion, angling his head to deepen it. He stole her breath. Then, it was over.

Eyes bright with lust met her own. One more date and I’m a goner. He opened the door and let her go first.

“Thank you for the dinner.” He shut her car door.

She rolled down her window, but before she could speak, he was kissing her again, his hand cupping her cheek. Then, there was nothing but cool air.
“Call me when you get home. So I’ll know you arrived safely.”

She nodded and shifted into reverse. Driving down the lonely road home, thoughts tumbled through her mind. Disorganized, jumbled, sensuous, hormonal ideas flashed before her. Jo had always been buttoned up. She had learned by the time she was eight to keep her room in order and her school projects as well.

Organization is the backbone of success, she’d told herself a thousand times. But now, she was a muddled, unorganized mess, a mass of feelings that ran the gamut from happy to terrified. It was as if she had tried to put her foot in a shoe that was the wrong size. This manner of being wasn’t the Josephine Parker she knew. This was a primitive animal that wanted to give in to lust, no matter what the cost.

But the sight, the taste, the feel, and the scent of the man were beyond tempting, mesmerizing her, seducing her. His confidence, his slow kiss, promised a bedroom experience like none she’d ever had before. And she wanted it. She wanted him. She wanted to give herself to him, all night long, to taste and be tasted by, to reach ecstasy with, and to make love to until sunrise.

This new feeling shook her to her roots. A part of her broke through the controlled, distant, untrusting, business-like Josephine Parker and became the lusty, sensuous Jo Parker who had to have this man—damn the consequences. It scared the crap out of her.

About the Author: Jean Joachim is a best-selling romance fiction author, with books hitting the Amazon Top 100 list since 2012. She writes mostly contemporary romance, which includes sports romance and romantic suspense.

The Renovated Heart won Best Novel of the Year from Love Romances Café. Lovers & Liars was a RomCon finalist in 2013. And The Marriage List tied for third place as Best Contemporary Romance from the Gulf Coast RWA. To Love or Not to Love tied for second place in the 2014 New England Chapter of Romance Writers of America Reader’s Choice contest. She was chosen Author of the Year in 2012 by the New York City chapter of RWA.

Married and the mother of two sons, Jean lives in New York City. Early in the morning, you’ll find her at her computer, writing, with a cup of tea, her rescued pug, Homer, by her side and a secret stash of black licorice.

Jean has 30+ books, novellas and short stories published. Find them here: http://www.jeanjoachimbooks.com
Posted by Krista Ames at 12:30 AM 0 comments 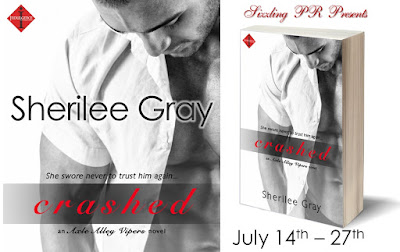 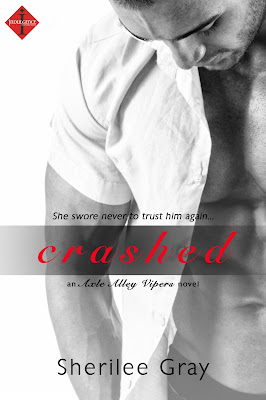 About the Book:  She swore never to trust him again...

Fiery mechanic Alexandra Franco should have known better. Years ago, her best friends' older brother took her virginity and broke her heart-or rather, doused it with gasoline, lit a match, and then walked away. And Alex definitely should not have indulged in another hot night with him after the fact. He's not the same boy she fell for, and she sure as hell doesn't want anything to do with the wealthy, ruthless man he's become.

Walking away from Alex was the biggest mistake of Deacon West's life. She belongs with him, and if getting her back means playing dirty, so be it. If she'll grant him a three-month, no-strings affair, he won't sell the building Alex and his sisters use for their auto repair business. Hell, he'll even sign it over to them. But will Alex ever entrust her heart to him again, or are they destined to crash and burn? 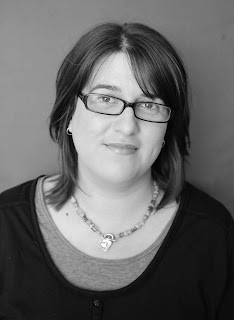 Sherilee’s always had a big (some may say warped) imagination, and as a kid scared herself conjuring up horror stories full of ghosts and other terrifying creatures. As she got older the stories changed quite a bit, but they were always there. Still, she never dreamed of actually writing down any of those wonderful imaginary people or places. Not until many years later when her sister introduced her to the wondrous world of romance novels, and her very large book collection.

She’s pleased to say, she still has the big imagination and monsters in her stories… only now they’re chasing their happily ever after.

Sherilee Gray is a kiwi girl and lives in beautiful NZ with her extremely supportive husband and their two children. When not writing or fueling her voracious book addiction, she can be found dreaming of far off places with a mug of tea in one hand and a bar of Cadburys Rocky Road chocolate in the other.

In their teens, the local boys had dubbed Alex and Deacon’s sisters the Axle Alley Vipers. All three were beautiful, tough in their own way, and if you tried to get too close, tried to touch, they would take a bite out of you.
Jesus. Nothing had changed.
When he got to the parking garage below his building, he saw Martin had done his job. Deacon’s car was parked behind Alex’s metallic-purple Viper, caging her in. Her choice of car said more than he thought she realized. Playing up to that moniker, to what it meant, was
just another way to keep everyone at a distance, to protect herself.
She stood against the driver’s door, arms crossed, more pissed than he’d ever seen her. Her long, shiny brown hair was pulled up in a messy bun that was sexy as hell on her, and those dark, exotic eyes had landed and stayed on him as soon as the elevator doors had opened and he’d stepped out.
His cock twitched under that intense stare.
He allowed his gaze to travel over her. Did she have any idea how stunning she was? The woman could wear a potato sack and still make his dick hard. The intricate rose tattoo decorating the upper half of her right arm drew his eye. It covered a jagged scar you could only see under a certain light, and it moved as she shoved her hands in her pockets, flexing her finely honed bicep. “This your doing?” she asked.
He kept on walking toward her. She tensed as he came closer, but he didn’t stop until he was close enough to smell her vanilla scent, hear her subtle exhale as he leaned in. “You were in my parking spot.”
Fire flashed in her eyes. “Bullshit. What about the other ten free spots?”
He shrugged. “I like this one.”
She blew out a frustrated breath. “If you’re so damned attached to this one, let me out and you can have it back.”
He reached out, ran the tip of his finger along that scar. It curved around a rose petal, then joined a thorny stem. He felt her tremble. Jesus, he loved that, loved how easily he affected her. “Let’s stop playing games. This isn’t about a parking spot, and you know it.”
“I said no.” Her voice shook and her breathing quickened.

Giveaway:
Sherilee is giving away a $25 Amazon Gift Card


a Rafflecopter giveaway
Posted by Krista Ames at 12:30 AM 0 comments