Please tell us about your current or upcoming release.
Title:
Flight Risk – book #4 in my Assignment: Romance series

Blurb:  When Aubrey Thomas, a phobic travel writer, must chose between jumping to what she considerers certain death from a skydiving static line or sinking even deeper into debt in the unemployment line, she scrambles to find someone-anyone!-who can help her overcome her debilitating fear of heights. Enter John Trelawney, a charming window washer who thinks nothing of dangling by a cable fifty stories up and claims he can cure her. Everything about John makes Aubrey nervous... including the way her heart kicks into overdrive whenever he's around. But, at the end of her rope, she takes him up on his offer. Can he really help her get over her fear of heights? Or will Aubrey find herself free falling...possibly even in love with him?

What is this book’s genre?   Romantic Comedy (Contemporary)
Is this the genre you usually write in?  Yes
Are there any genre’s you haven’t written that you’d like to try? No

What inspired you to write this book?
I work in downtown Chicago. While strolling down State Street on my lunch hour last summer, I skirted around some scaffolding and got doused with a bit of icky, sudsy water from a window washer's bucket. Later that same week, window washers were stationed at my building…some mighty hunky window washers. Afraid of heights as I am, I was careful to not get too close to the window, but still…a story was born.

How did you pick its title?  Did it come first or did you have to write the story first?

Once I had the basic plot, the title sprang to mind and stuck. The rest of the story followed.


How did you create your characters?  Did you use any real life people in their making?
John made his first appearance in False Start (book #1). While he played a small (but important) role in that story, I didn’t share many details about him. Aubrey’s first appearance came in Key Change (book #3). The more I developed her character even for those brief scenes, the more I knew I needed to somehow get her paired off with John. As I write, I need to have a face or persona that helps me envision the characters. For John, I picked Jake McDorman. For Aubrey, I pictured a young Tea Leoni.

Who is your favorite character of this book and why?
It’s so hard to pick! I love that both Aubrey and John have to step way outside of their comfort zones to get what they want which ultimately leads them to each other.

What is your favorite part of this book?  Can you share an excerpt from that part?
One of my favorite parts is their first encounter in a crowded coffee shop. Aubrey is trying relate a harrowing experience with a zip line and starts to pass out. John, standing in line behind her walks her to a chair where he’s able to calm her in a way no one else can.

Excerpt:
The interior of Chez Doug's started to spin.
Closing her eyes, Aubrey leaned back against something solid.
"I gotcha." That voice came from behind her.
With two hands gripping her upper arms, she let herself be walked to a nearby chair where the guy dropped to one knee right in front of her. Taking her hands in his, he said in a low, hypnotic voice, "Look at me. Look into my eyes."
Struggling to take a full breath, she yanked her hands from his and glared into his eyes—his rich, caramel-colored eyes.
And after a full minute had passed, she started to feel nothing short of fine. Absolutely calm and fine.
Morphing her glare into a scowl, she breathed, "How did you do that?"
At that, his teasing smirk returned. "You're not afraid of heights."
Her defenses on high alert, she shot back, "Oh yes I am," well aware that she sounded like a fifth grader picking a fight on the playground.
With a quick shake of his head and that same teasing smile, he murmured, "You're just afraid of falling."
Her face fell into a frown. "Oh."
The thought had never occurred to her, but now that she thought about it, it made perfect sense, especially after seeing her husband fall headfirst to his death not a year before. Eager to erase that disturbing image from her mind, she pulled her eyes back to his.
As if reading her mind, he said, "And I can totally help you get over that."
Ah, here we go.
"Yeah, I'll be you can," Aubrey chortled. "Excuse me. I have to go." She attempted to stand, but he sprang up first.
"Easy does it." Taking her clammy hand in his, John pulled her to a standing position. "You sure you're OK?"
His concern was starting to unravel her defenses, making it that much more difficult to keep her scowl on.
When she nodded, he reached into his back pocket and produced a pen. "Here. Just gimme a second."
Watching as he gave his pen a click, she was surprised to see him uncurl her hand and start writing something on her open palm.
It tickled like hell. Her scowl abandoning her, she pressed her lips together to suppress a giggle.
But the ink wouldn't stick. Her skin was still too damp.
Which might explain what he did next.
Aubrey watched, mesmerized, as he held her open palm to his mouth and blew on it.
While part of her brain knew he was just trying to dry her skin, when he locked his eyes on hers, the rest of her was all in for him doing more of the same on the rest of her clammy self.
Feeling the tip of his pen press against her skin with just enough force to leave a mark but not inflict any pain, a delicious warmth pulsed through her.
When he was done, he released her hand and looked right at her. "I've got to get to work. Give me a call sometime."

What was the hardest part of this book to write? Can you share an excerpt from that part?
A lot happens to Aubrey within the first 24 hours after meeting John. She’s on a tight deadline to get over her debilitating fear of heights and find a “plus one” for a wedding she’s standing up in. As a result, she quickly finds herself torn between Malcolm, a handsome, well-off accounting executive whom she has already asked to the wedding and a really hot nobody (John) who offered to help her get over her fear of heights. The hardest part was making it all feel genuine and plausible. Here’s a little snippet:
"How are you on boats?" John asked as they walked along the embankment.
"I'll have you know I've cruised down the Amazon, Yangtze, and Congo Rivers. I even rode on a fishing trawler in the North Atlantic with a bunch of tourists on a marine biology expedition. During a squall, too."
John stopped and turned to her. "Would you please stop doing that?"
"What?"
"Listing your credentials. I already know you're brave. You're the one who seems to have a hard time believing it."
All she could do was stand there and wonder how it was that this guy who she had met a little more than twenty-four hours before just told her, in essence, the exact same thing her childhood BFF told her over too many margaritas.
Pulling herself up, she drew in a breath and replied, "I'm fine on boats, why?"
By way of an answer, he waved in the direction of a school-bus-yellow boat docked along the river embankment and said, "The quickest way to get where we're going."
After purchasing a pair of tickets, John handed her one. "Ladies first."
Aubrey made her way to the stairs and started climbing to the upper deck. When John had caught up and slipped into the seat facing her, he teased, "This isn't too high?
Aubrey was busy coming up with a smarmy comeback when she saw him suddenly grab his phone from his back pocket. Leaning forward with his elbows on his thighs, he frowned at it, studying what she assumed was a text he had just received and then started texting back as if his life depended on it.
As he did, her eyes riveted on his hair, the style of which looked like a grown-out version of a bad five-dollar cut. And it was a complete mess.
Overcome with the urge to sink her fingers into it, she was surprised when he looked up.
"Problem?"
"No," she croaked.  Forcing herself to swallow, she turned her attention to the high-rises flanking the embankment as the water taxi bobbed west. Just before ducking under the Michigan Avenue Bridge, it stopped to take on more passengers. Soon they were surrounded by a group of badly behaved kids and their oblivious parents.
The boat revved its engine and began edging west under the bridge. With Malcolm's high-rise soaring over them to her left, she wondered what he was doing at that very minute.
Probably working out or maybe reading some poetry or helping an elderly neighbor with their grocery shopping.
It never occurred to her that he might be doing something mundane like cleaning his toilet, flossing his teeth, or taking out his garbage.
She was busy trying to picture herself standing on the other side of Malcolm's window, watching water taxis ferry passengers under the Michigan Avenue bridge, when she heard a voice ask, "So what happened?"
It wasn't until she felt something nudge her foot that she realized it was John.
"I'm sorry. What?"
He was sitting with his legs stretched out on either side of hers with his arms, his chiseled, tanned, mouth-watering arms, folded across his chest.
Down girl.
“Have you always been afraid of heights?”

Did you have any special rhythm or quirks while writing this?
This was the first book I didn’t completely plot out first. I let this one guide me which was both terrifying and really fun!


Is this a stand-alone book or is it part of a series?  If so, we want to hear about it and what’s next in the series.  If not a series, what comes next to be released?
It is book #4 in my series, but enough detail is provided to make it a standalone. Feedback so far is that the story seems richer
story if you’ve read books 1 – 3 first. 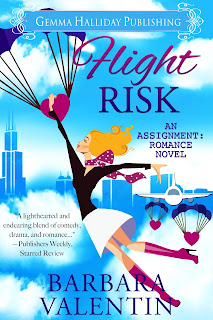 When Aubrey Thomas, a phobic travel writer, must choose between jumping to what she considerers certain death from a skydiving static line or sinking even deeper into debt in the unemployment line, she scrambles to find someone—anyone!—who can help her overcome her debilitating fear of heights. Enter John Trelawney, a charming window washer who thinks nothing of dangling by a cable fifty stories up and claims he can cure her. Everything about John makes Aubrey nervous... including the way her heart kicks into overdrive whenever he's around. But, at the end of her rope, she takes him up on his offer. Can he really help her get over her fear of heights? Or will Aubrey find herself free falling...possibly even in love with him?

About our Author:
Author of the bestselling Assignment: Romance series, Barbara was named "Indie Star of 2015" by Publishers Weekly when her first book, False Start, earned a coveted starred review. A member of Romance Writers of America, she looks forward to the day when her to-do list includes "Send Oprah a thank you note" and "Accept Godiva's request to be a taste-tester."

a Rafflecopter giveaway
Posted by Krista Ames at 12:08 PM