So excited to have a new release from Medeia Sharif !!!  Woohoo !!!
And she's agreed to answer some questions for us about
the new book, A Love that Disturbs !!!

Please tell us about your current or upcoming release

A Love That Disturbs

Maysa Mazari is alarmed by her mother’s talk about arranged marriage. As a hijab-wearing Pakistani-American, she wants to find love on her own. Her judgmental Muslim clique has protected her from racist taunts, although the leader is turning on her as Maysa strays from the group because of her attraction to Haydee.

Haydee Gomez is a former gang member and juvenile detention student. Now living with a clean-cut aunt, she wants to turn her life around, even though one person will never let her forget her roots—Rafe, her abusive pimp. Haydee attempts to pull away from a life of prostitution when she develops feelings for Maysa, although Rafe isn’t willing to give her up too easily.

Finding themselves in danger from Maysa’s friends and Haydee’s pimp, it’s apparent their love disturbs everyone around them as they fight to stay together.

What is this book’s genre?  Is this the genre you usually write in?  Are there any genre’s you haven’t written that you’d like to try?

This is contemporary YA. I’ve written in this genre a few times already, although this is my first LGBT book. I’d like to be published in sci-fi, so I need to beef up world-building in my writing.

What inspired you to write this book?

I don’t want to give away the ending of my book, but I read a grisly news article about what a group of girls did to a teenage friend. Shortly after reading that article, I met a tattooed girl in passing who was quiet and secretive. I put the two together to make Haydee and Maysa.

How did you pick its title?  Did it come first or did you have to write the story first?

It took a long time to figure out the title. I wrote the draft, studied the theme, and wrote a short synopsis until I came up with something.

How did you create your characters?  Did you use any real life people in their making?

Yes. As I mentioned above, one girl inspired me from a news article and the other I met briefly in real life.


Who is your favorite character of this book and why?

Haydee is my favorite character because she’s been through so much. Also, it was more exciting to write her side of the story because her life is grittier than Maysa’s.

What is your favorite part of this book?  Can you share an excerpt from that part?

It’s not excerpt-ready, but Maysa and Haydee’s first date, the planning of it and their meeting, was my favorite part since it’s sweet and romantic.

What was the hardest part of this book to write? Can you share an excerpt from that part?

The ending, but I don’t want to spoil it for anyone. The research for it was disturbing and dampened my mood for quite awhile.

Did you have any special rhythm or quirks while writing this?

I don’t recall. I just remember writing steadily, almost every day, until I was done in about a month.

Is this a stand-alone book or is it part of a series?  If so, we want to hear about it and what’s next in the series.  If not a series, what comes next to be released?

This is a stand-alone book. I have some manuscripts I’m getting ready for submission, but nothing up for release yet.


A Love That Disturbs
by Medeia Sharif 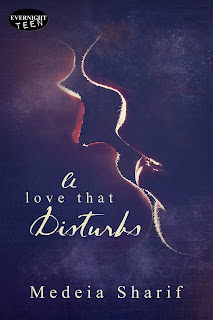 Maysa Mazari is alarmed by her mother’s talk about arranged marriage. As a hijab-wearing Pakistani-American, she wants to find love on her own. Her judgmental Muslim clique has protected her from racist taunts, although the leader is turning on her as Maysa strays from the group because of her attraction to Haydee.

Haydee Gomez is a former gang member and juvenile detention student. Now living with a clean-cut aunt, she wants to turn her life around, even though one person will never let her forget her roots—Rafe, her abusive pimp. Haydee attempts to pull away from a life of prostitution when she develops feelings for Maysa, although Rafe isn’t willing to give her up too easily.

Finding themselves in danger from Maysa’s friends and Haydee’s pimp, it’s apparent their love disturbs everyone around them as they fight to stay together.

At least Rafe wouldn’t bother her for a few hours. He knew it was her first day in a new school. Haydee blew her nose, wiped her eyes, and left the bathroom. She walked into first period English and handed the teacher the pass. Students stared. A few had tattoos peeking from the edges of sleeves and shorts, but nothing like what she had. She felt like The Tattooed Woman and avoided staring back at them. She wasn’t in alternative school anymore, where most students had a nasty attitude about anything related to academics. The students in front of her had their books open and had been reading and writing before she walked in. They weren’t looking to fight her and she wasn’t going to fight them.
“Let me write your name down,” the teacher said. “I’ll make a folder for your work. How do you say your name? Heidi?”
“No, it’s Hay-dee,” she corrected Ms. Tookes. “Haydee Gomez.”
Ms. Tookes wrote her name on a notepad and nodded toward an empty desk, so Haydee sat down in a seat in the back with a textbook. The assignment was on the board, but Haydee had trouble seeing. She had lost or broken so many of her eyeglasses in the past that she stopped wearing them. She was slightly nearsighted and lived with her blurry vision just fine. Tomorrow she’d come to class on time and get a seat in the front.
She continued to receive some stares, but then students went back to work.
Feeling like she was on display, Haydee twirled the drawstrings of her hoodie, chewed the inside of her mouth, and smoothed down the baby hairs on her forehead. The door opened and she was grateful for another distraction. It was Maysa, her pink-and-green silk scarf glistening under the fluorescent lights. Haydee’s vision sharpened, as if she could see Maysa clearly, while everything around her was fuzzy. Maysa caught Haydee’s gaze and smiled before turning to Ms. Tookes. “May I take a few pictures of the students working?”
The teacher smiled back. “Take all the pictures you want.”
Maysa had a sunny, innocent demeanor. Haydee wondered what it would be like to have her life. She must have two parents taking care of her. She probably had brothers and sisters who were as nice as she was. Her parents were strict, if she had to cover her head like that, but they most likely were loving. Haydee’s curiosity intensified. She needed to know more about Maysa, who was walking to the back of the room where she was.
“Can I take a picture of you reading the textbook?” Maysa asked.
“Sure,” Haydee said. Anything. She wanted to please this girl. Haydee opened to a random page. It was a Shakespearean sonnet, which was like another language to her. Haydee liked to read, but not classic works. She enjoyed romance books and read any that she could get her hands on. They helped her escape from her own reality by taking her someplace else for a few hours.
Flashes sparked as Maysa took a few shots of Haydee. “You’re very photogenic.”
“Really?” Haydee looked up. “Let me see.”
Maysa neared her and held the back of the camera to Haydee’s face. Looking at the screen, Haydee saw she didn’t look too bad. Her bun was messy in a stylish way, and her head was tilted down to her book. Her cheekbones were sharp, and her right side was on display—not the left one with the black eye. “It’s a nice shot.”
Maysa smiled, and Haydee blinked, not knowing what else to say or do. She wanted to keep Maysa talking so that she wouldn’t leave right away. Because of the picture taking, a few other students had started talking and sneaked looks at the two of them. Haydee knew they must seem like an odd pair interacting with each other. Maysa showed her the next few pictures, at different angles. “I have to go now and get to the next classroom,” she said.
“Oh, all right.” Her gaze was riveted to Maysa’s slender form as she walked out the door.
Haydee’s phone vibrated again. When the teacher wasn’t looking, she slid it out of her pocket.
Got a nice dress for you tonight
Come to my place later so you can try it on
Red, your perfect color
And just like that, the moment was ruined. She shoved her phone back into her pocket. Like she needed another reminder of everything that was wrong in her life. She gritted her teeth and made fists, then forced herself to loosen her hands. She didn’t want to think about Rafe anymore, but how could she not? He was like a virus in her system and she couldn’t get rid of him. She admitted that he took care of her: he beat up johns who mistreated her, handed over any money he promised her, and challenged anyone who bothered her on the rough streets of Miami.
If it hadn’t been for Rafe, she might have been dead at one point, because one of the johns locked her in a bathroom, threatening to kill her later, and he took care of the situation. There were the existing issues of earning money and a degree of safety, but surely she could find another line of work. How would she tell Rafe that she wanted out without having his temper explode? She had seen him cut a man’s face with a razor. Would he do the same to her?

a Rafflecopter giveaway
Posted by Krista Ames at 12:30 AM

Email ThisBlogThis!Share to TwitterShare to FacebookShare to Pinterest
Labels: A Love that Disturbs, Amazon Giveaway, BtG book tour, Evernight Teen, It's All About the Book, Medeia Sharif, New Release