Playlist for the book:

While I don’t have a specific playlist that I listened to while writing (I’m a Pandora person, so who knows what was on and when), I do have songs that I associate with certain parts of the book:
1.    “Cherry Wine” - Hozier -- This song goes so well with chapter 1, specifically with the introduction of Eroyn’s relationship with her Elder, Grace. It’s a sweet melody which helps you feel the way Ero looks up to her, but it also has these haunting notes that hint at the inevitable complication of Grace’s dementia.
2.    “Howl” - Beware of Darkness -- When Ero and Archer meet each other for the first time, and subsequently almost kill each other, this song comes to mind. It’s this really incredibly aggressive song with romantic tension strung through it. This is pretty much a mirror of those two characters.
3.    “Raise Hell” - Dorothy -- There is a flashback to when Grace chose Ero as her Youth, and I will tell you that it involves Ero tearing her dress and starting a fist fight. She is the queen of raising hell, so this song is a no-brainer.
4.    “The Lightning Strike Part I” - Snow Patrol -- This is a perfect backdrop to the climax of the book, which is exciting, terrifying, triumphant, and painful all at once.
5.    “Wings” - Birdy -- In chapter 22, there is this really sad moment that I had a rough time writing, and I played this over and over, in tears while writing. But, just like the chapter, the song ends on this heartbreakingly hopeful note. It’s just perfect.
6.    “Bottom of the River” - Delta Rae -- At the end of the book, Ero makes a vow to seek revenge. This, my friends, is a fantastic song for that. 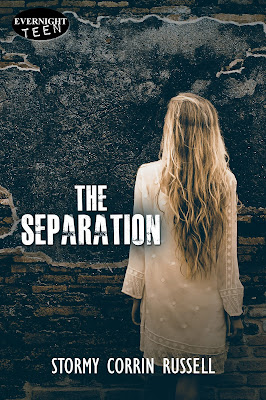 In a world where men and women live on separate sides of a massive wall, seventeen year old misfit Eroyn Fairchild has always been too busy with her broken family to wonder why they live the way they do.

When a man from the other side breaks through, Ero holds him hostage, hoping for a ransom large enough to pay for her Elder Grace’s treatment. Things get more complicated as the man is followed by two others who make Ero question everything she’s ever known about her life.

As Ero searches for the truth, the lines between right and wrong blur, leaving her to choose between saving her city and saving herself.

Teaser:
One of the things I love about Grace is that she is the heaviest sleeper I know. So heavy, in fact, she doesn’t hear me dragging a thrashing body through the front door at two in the morning. For the first time in my life, I consider it lucky that we live on the outskirts of the north side. If we didn’t, I would never have been able to get it this far without attracting attention. A loud, confused sound starts to come from the net, so I kick it firmly.
“Shut up,” I hiss, looking around nervously. I’m not worried about Grace rousing, but I don’t want the neighbors waking up and noticing my noisy cargo. I kick twice more, as hard as I can. Silence, finally. With a sigh, I wipe my arm across my forehead, getting rid of the sweat beading there. I sink down on the couch, staring at the large lump inside the net on my living room floor unblinkingly. Little red flowers are blooming all over the heavy white plastic, and they grow quickly. It’s blood, I realize with a sick feeling. It’s seeping through from the inside and leaking onto the clean white carpet of our house. It can’t be real. It just can’t be.
I see Almond cut across the room and sniff at the lump with caution. With one movement, I scoop him up and press him to my chest in horror. For the first time, I realize the danger of what I've just done. I’ve invited a monster into my house.
I’ve made a horrible, horrible mistake.
It takes Luna ten minutes to get here five minutes faster than usual but it feels like hours. She lets herself in the back door quietly, but I rush into the kitchen to meet her.
“Where’s Grace?” she asks with urgency, dropping her medical bag on the kitchen table.
“What? No, I … this isn’t about Grace,” I stutter. I open my mouth once, then again, but it’s no use. Nothing is coming out, so I turn on my heel and tiptoe into the living room. Luna wordlessly follows, eyeing the netted form. I kneel next to it, holding my breath. With shaking hands, I slide the knife into the plastic and pull it upwards slowly. I know what it’s going to reveal when I pull the plastic away, but it still makes my breath leave my lungs in an audible whoosh. I can’t seem to inhale again once it’s gone. I hear Luna do the same next to me.
“Is it a…?” She leaves her sentence unfinished, and I nod. The small slit I cut in the plastic shows a thick arm under a rolled-up shirt, far too thin for our recently nasty winter. At the very end of the slit, I glimpse a swollen throat and a jaw covered in a dark shadow of hair. A chill runs down my spine and my stomach turns.
“Is he alive?” Luna asks, her voice small.
“I … I think so.” I stare at the floor guiltily. “I kicked him pretty hard to shut him up.” She scoots closer and with trembling fingers folds back the plastic to see his side, where most of the blood is coming from.
“Cut the rest of it off him,” she tells me quietly. I stare at her in shock.
“But, he––” She cuts me off with a look.
“He isn’t dead yet, but he will be if I don’t stop the blood loss.”
I swallow hard, and comply. 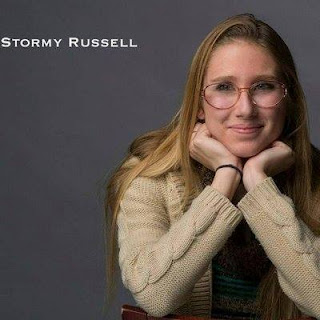 About the author:
Stormy Corrin Russell is from Orwell, Pennsylvania where she first
started writing from the moment she could hold a pencil. She still loves to write there and nearly everywhere else. She loves her family, the outdoors, laughing, eating, and her kitten/writing partner, Maya.

a Rafflecopter giveaway
Posted by Krista Ames at 12:30 AM