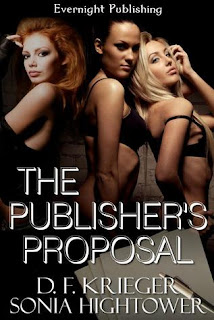 Determined to win this little game, Sylvia moved up to her sub's neck.  She nipped and kissed lightly before running her tongue across Katia's earlobe.  The whimper turned into a moan and Sylvia couldn't help glancing at Ivy out of the corner of her eye.  Her boss had one of Katia's legs lifted and she was mirroring Sylvia's Motions on the inside of Katia's thigh.
Oh, now that's dirty.  I would have started by kissing her ankles.
Sylvia narrowed her eyes and decided to beat the redhead to the punch.  They all knew where this was headed, and she'd be damned if Ivy got to her sweet spot first.  She adjusted so that she was seated on the edge of the bed, her feet still planted firmly on the floor, and her ass hanging half off.  It wasn't too comfortable, but it gave her access to what she wanted.  Katia's pert nipples beckoned her like cupcakes in a bakery.  She wanted nothing more than to lick the sweet tips of them until she was satisfied.
As Sylvia began lowering her head, she noticed Ivy had paused to watch her. The woman's eyes were narrowed, as if studying Sylvia's movements.  That's right, you are the student and I am the master.  You better be studying hard.
With slow, deliberate movements, Sylvia swirled her tongue around Katia's breast.  She avoided the nipple with great care.  When she tilted her head to glance at Katia's face, the womanwas staring at her with wide, pleading eyes.  Oh yes, she knew that look and knew exactly what the sub wanted.  Suddenly, Katia threw back her head, her body arched off the bed, and her eyes shut.  Her breast almost slammed right into Sylvia's mouth.
A quick glance down at Katia's pussy confirmed Sylvia's suspicions:  Ivy was fingering her, fast and hard.  An orgasm was wracking the blonde's body, and her moans were clearly audible through the gag.  Katia was tugging at her restraints, her fists clenched.
She's right on the edge, slipping, but not free-falling yet.  Here's my chance.
Buy Links:       Amazon   Smashwords   Barnes & Noble
Watch the Trailer:   Youtube
embed code:
Posted by Krista Ames at 1:06 PM