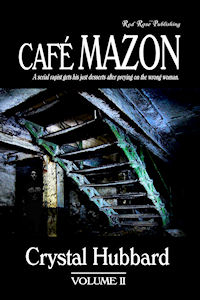 The tables are turned on a serial rapist and his dimwitted accomplice when they attack a woman unlike any of their previous victims.
Excerpt:
He'd first seen her the last time he was here, after he'd been interrupted by strange voices and footsteps.  He hated being interrupted, especially since he'd been having such a good time, but in the end it all worked out.  If he hadn't taken the time to pound Terry for getting distracted with that damn magic book, he wouldn't have seen his latest flame.  She'd rounded the corner and headed straight for the café.
Dee and Terry had eaten there a few times.  Dee didn't much care for the aloof manner of the staff or the snooty misspelled French name, but the food was good and you got a lot of it.
Terry had complained the whole time, but Dee had sat in the car all the rest of the night, waiting for his new target to leave the diner.  She didn't come out until after the lunch rush.
Dee followed her to the subway, then took Terry to McDonald's for a few Happy Meals.  Later that night, they went back to see if she'd return to the diner.
She did.
Every night, same time, same corner, same routine until Dee couldn't stand it anymore.
Now, he finally had her.  He pulled out his hunting knife, thrilled with the clean grab.
He used the tip of his knife to trace the center seam of the back of her pants.  The halves fell away, revealing two rounds of golden flesh. If her ass wasn’t God’s finest work, it had to be in the top ten.
“No panties, huh?” Dee smirked.  “You dressed for our date, I’ll give you points for that.”
She glanced over her shoulder as the blade lightly moved along her spine.  "Are you about finished?" she asked with a slight yawn.
Her voice was a low, silky, disinterested growl.  To Dee, it was as sexy as it was annoying.
"Baby," Dee sneered, slicing through the backstrap of her bra, "I haven't even got good and started."
She turned around, slowly lowering her arms.  "Three women have been assaulted and killed around here.  Your work?"…
http://redrosepublishing.com/books/product_info.php?products_id=1013
About the Author:

Crystal Hubbard is a full-time writer living in the Midwest. She is the proud mother of four and spends her free time volunteering to support causes related to Veterans rights, the American Red Cross, the American Cancer Society and writing workshops in elementary and high schools. She is also a certified cake decorator and accomplished baker. Her interests include martial arts, reading, sewing, boxing, hiking, yoga and shopping for oddities at yard sales.